I’m thrilled to do a follow up report on the Four Pillars framework with my colleague and friend, Manuel Pastor. This report looks at this process of power building for just transition in four states: California, Kentucky, Louisiana, and New York. We combine an analysis of the pillars of just transition – strong governmental support, dedicated funding streams, diverse coalitions, and economic diversification – with an analysis of how to change power at a state level that focuses on the conditions that impact possibilities, the community-level capabilities that facilitate effective voice, and the arenas in which power is contested. Ultimately, the fight for a just transition is a fight for justice. And, while we know it will be hard and long, the stories we heard showed how advocates and organizers, often in the face of great odds, come together and force the change that makes people’s lives better. Building upon these efforts through supporting organizing, coalition building, and empowering communities is the blueprint for advancing a just transition. Through these channels, we can transition from a dirty polluting past to a just and healthy future. The report can be found here. 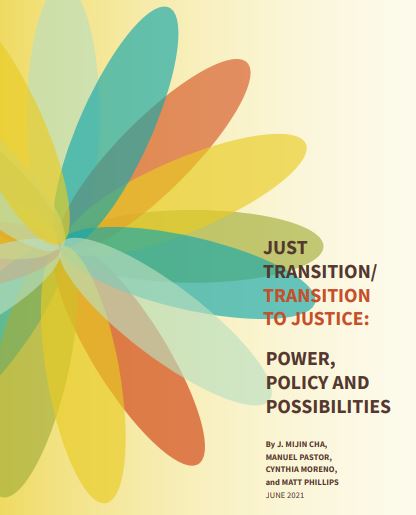 As part of the Just Transition Listening Project, convened by the great Labor Network for Sustainability, we interviewed over 100 people who have either experienced transition or who face transition. This effort is the groundbreaking both in the scale of the effort and also the centering the voices of those directly impacted by transition. The report is broken down into three sections: problem, process, and pathways. The problem section looks at the challenges that arise from transition, including the long history of unjust transition. The process section analyzes how labor comes together and how labor, climate, community, EJ, Indigenous, and other interests come together. The final section presents ways to advance a just transition. The report concludes with a set of policy recommendations necessary for not just the energy transition but also for a just future. I’m honored to have worked with my brilliant colleagues at Colorado State University, Rutgers University, and CSU-Dominguez Hills.

In 2019, with generous funding from the 11th Hour Foundation, my colleagues at USC, UC Berkeley, Occidental, and the Program for Environmental and Regional Equity (PERE) analyzed how to implement a “just transition” for California. Just Transition advocates for an equitable transition to a low-carbon future that mitigates the economic losses from decarbonization, particularly for fossil fuel workers and communities dependent upon fossil fuel extraction and use for economic security. We argue that just transition must also address the historical injustice created by the fossil fuel economy and ensure that opportunities in the low-carbon economy are available to all communities, not just those that have historically benefitted from an extractive economy. We present a four-pillar framework to guide the creation and implementation of just transition policies.

During these dark Trump times, some good climate news: NY Governor Andrew Cuomo announced an major climate jobs initiative based on work that my colleagues at the Worker Institute and I did. This work is part of Labor Leading on Climate, a three-year initiative of the Worker Institute that, “advances knowledge, policies, and practices to enhance the role of labor and working people in addressing the environmental and climate crises. The initiative’s efforts focus on building a truly sustainable society and economy.” As part of this initiative, I co-authored a report Reversing Inequality, Combatting Climate Change: A Climate Jobs Program for New York, which was the basis for the climate jobs initiative that lays out a policy agenda for creating good, family-sustaining jobs while substantially reducing carbon emissions.

Back in 2009, for over a year and a half, Urban Agenda convened 170+ stakeholders to create a vision for how to build an equitable green economy in New York City. The culmination of that effort is the New York City Green-Collar Jobs Roadmap, a co-release between Urban Agenda and the Center for American Progress. The Roadmap covers six priority areas: growing the green economy and green jobs, ensuring these jobs are good jobs that reach target populations, transitioning existing workforces into sustainable fields, increasing coordination between agencies and local, state, and federal efforts, expanding and greening existing programs, and collecting data for refining programs and approaches.

As a senior fellow at Data for Progress, I’ve co-authored a number of blogs:

In addition, I have written extensively on green economy, climate justice, and environmental justice issues for several years:

Race and the Environment/Climate

Beyond GDP and Alternative Metrics

In addition, I blogged at PolicyShop several times a week. My full list of blogs can be found here. Here are some highlights: